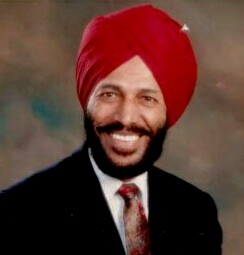 Legendary Indian runner Milkha singh died this Friday at a hospital in Chandigarh city of North India. He died at the age of 91. The cause of his death was Covid-19 Coronavirus.

Nicknamed the ‘flying sikh’, Singh was a four times Asian games golf medalist. He was a representative for India at the Olympics in 1956, 1960 and 1964.

Milkha’s wife Nirmal kaur, who was a former volleyball captain had also died of Covid-19 just a few days earlier. She was 85 years old. Singh has one son and three daughters.

He first tested positive for coronavirus on may 20. Milkha singh was one of India’s first sports superstars and an ace sprinter. He is one of India’s most celebrated athletes.

Singh was the first Indian athlete to win a gold medal at the Commonwealth Games. He won the gold medal in the 400m division in 1958 Commonweal games. He narrowly missed out on an Olympic medal, finishing fourth at the 400m final of the 1960 Olympic Games held at Rome.

Milkha Singh is considered a national hero in India. A Bollywood film was inspired by his life called “Bhaag Milkha Bhaag”. It was released in 2013.

Milkha Singh was a true legend who overcame a childhood tragedy And became an idol and inspiration to the younger generation.

USA will get a second Statue of Liberty from France
Covid-19 vaccines are becoming less effective against the Delta variant, says WHO official