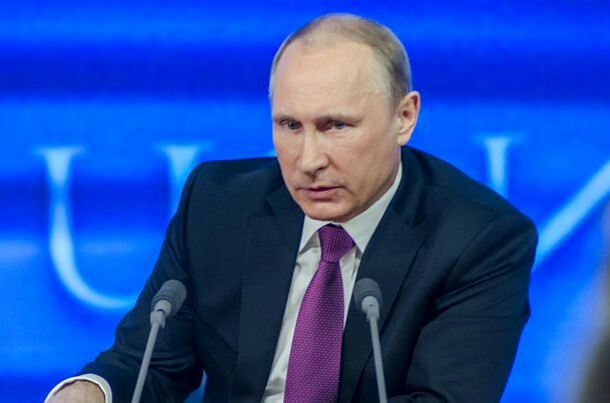 While speaking in a marathon call-in show “Direct line” this Wednesday, Russian president Vladimir Putin said that the incident in black Sea involving a British warship was clearly a provocation by UK and the US stating that USA was also involved in the incident.
He said that a US reconnaissance aircraft was also operating with the British destroyer on June 23 when the warship sailed through the black Sea.
He claimed that a long range US reconnaissance aircraft took off from the Greek island of Crete was operating with the British ship. He said that the aircraft’s mission was to monitor Russian military’s response to the British warship.
When asked, Putin said such an incident couldn’t have triggered a full scale war even if Russia had sunk the destroyer because the west knows it can’t win such a war.
His statement made it clear that Russia will give a tougher response should a similar incident happen again.

About the black Sea incident of 23rd June, president Putin said “It was clearly a provocation, a complex one” that involved not just the British but also the Americans. Then he added that Even if they had sunk the British warship, it would not stir a global conflict because the west knows that they could never win such a war.
Then he talked about his recent meeting with US president Joe Biden. He said “The world is undergoing a radical change. Our U.S. partners realize that, and that’s why the Geneva meeting took place. But on the other hand, they are trying to secure their monopolist stance, resulting in threats and destructive action such as drills, provocations and sanctions.”
Then he pointed out that even though the West doesn’t recognize Crimea as a part of Russia, they shouldn’t get involved in the matter and provoke Russia.
He said, “We are fighting for ourselves and our future on our own territory. It’s not us who traveled thousands of kilometers (miles) to come to them; it’s them who have come to our borders and violated our territorial waters.”
Putin also showed apathy in meeting with the Ukrainian president Volodymyr Zelenskyy. He said “Why meet Zelenskyy if he has put his country under full foreign control and key issues for Ukraine are decided not in Kyiv but in Washington, and, to a certain extent, Paris and Berlin?”
Putin insisted Russia will firmly defend its interests at any cost.
Some Russian officials have also condemned Britain’s act and has said that shall something similar happen again, they will use deadly force which could result in further escalation.

Western remarks on the incident

Britain’s defense ministry said the British destroyer HMS Defender was operating in Ukrainian territorial waters in accordance with international law. They also denied that the Russian coast guard had fired any warning shots.
Though a person onboard HMS Defender confirmed that the ship was indeed shadowed by two Russian coast guard ships and at least 20 Russian fighter planes were caught on the ships radar when they were near Crimean waters.
UK, like most other nations doesn’t recognize Russia’s 2014 annexation of Crimea.
The US defense department had no immediate comment on Putin’s claim that a US reconnaissance aircraft was operating in concert with HMS Defender.

What else Putin talked about

Putin talked about domestic issues most of the time of the show.
He was hoping that the country would be able to avoid a nationwide lockdown. He said that as Russia faces a surge in coronavirus infection.
Putin also revealed that he received the Russian Sputnik V Covid-19 vaccine and urged every Russian to get vaccinated and not to be hesitant about it. Putin got his first shot In late March out of public eye.